At least 34 killed in attack on Thai pre-school


A ex-policeman has killed at least 34 people, most of them children, in a gun and knife attack at a pre-school daycare centre in north-east Thailand.
Police say he then killed himself and his family after a manhunt following the attack in Nong Bua Lamphu province.

Children and adults are among the casualties at the nursery - police say the attacker shot and stabbed his victims before fleeing the scene.
The former officer, aged 34, was sacked last year for drug use, police said.

At least 22 children were among the dead. Some victims aged as young as two were attacked as they slept. A dozen people who were injured have been taken to Nong Bua Lamphu district hospital. 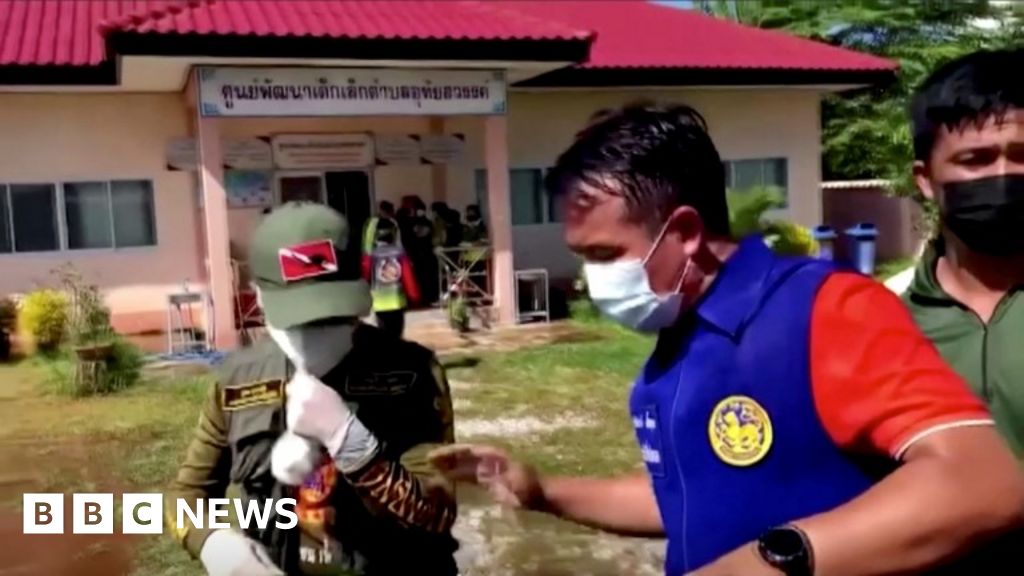 Thailand: Many children among dead in pre-school attack

An ex-police officer killed at least 34 people at a daycare centre before killing himself and his family.
www.bbc.co.uk

Fuck me, I'm gonna need time processing this one.

Hopefully he'll be shot on sight..!!

He killed himself immediately after his wife and son. Death toll stands at 38 with 10 in hospital.
Dumb cop sent crime scene photos via LINE to a colleague ... they've been circulated widely ... he needs shooting! Most of the children were asleep on the floor when killed with a machete blow to the head. A few were also shot.

The scourge of yaba and meth is wrecking many lives in Thailand. Very sad.

kaptainrob said:
He killed himself immediately after his wife and son. Death toll stands at 38 with 10 in hospital.
Dumb cop sent crime scene photos via LINE to a colleague ... they've been circulated widely ... he needs shooting! Most of the children were asleep on the floor when killed with a machete blow to the head. A few were also shot.

The scourge of yaba and meth is wrecking many lives in Thailand. Very sad.
Click to expand...

There's a thread running on ThaigerTalk which you may find interesting albeit even more scary. The killer's autopsy revealed 'no detectable drugs in his system' and one of TT's members explained the effects of Meth addiction > HERE
Note: (Meth and yaba are available here at ridiculously low prices ~ 7 to 10 baht a hit!)
Excerpt:-

Good comments. A couple of observations regarding Meth. It is stronger today, close to 90 percent pure, using the Chinese precursors. The damage and addiction are beyond comprehension. You are right about "no treatment", in the conventional rehabilitation sense. Recovery is possible, but it requires substantial investment in time, money, family and community support, plus an unshakable desire on the part of the addict to want recovery. I'm only going to speak from my memory when I was working with addicts years ago and not bother with citations on a few other aspects regarding meth.

The damage is in fact permanent, but given enough time, much of the physical and psychological damage can be reversed. Not all of it unfortunately. Once a person has progressed to methenamine psychosis, the chances of recovery are less than one percent. About 50 percent of those that recovery from meth addiction "relapse". This is one of the reasons this drug is such an evil drug. It does create permanent changes in the brain, especially dopamine receptors. Most rehabilitation clinics won't even take this addiction on unless the addict's family and community are there for support. Many addicts actually need to move away from everyone ever associated with to stand a chance for recovery. Unfortunately for the addict that wants to try and escape this drugs clutches, he or she is now so stigmatized, there is no support system to even make the attempt.

I don't think most people understand just how severe meth psychosis is. It is as powerful as psychotic schizophrenia, and the person cannot differentiate between reality and delusional thinking.

This is only going to get worse worldwide. I remember when I was visiting New Zealand in 2019 there was a billboard leaving the airport with a warning for elementary children's parents to "talk with them about meth". I thought then, we have already lost this battle.

We have never seen a drug like this in our lifetime. Opium and heroin are nothing compared to this drug. The people who use this drug and become addicted are not evil. They are victims of an international drug production and distribution network with the sole intent on making money and destroying lives.

So was he actually an addict? Could be a convenient cop out for the BIB to escape social criticism.

Bacon said:
So was he actually an addict? Could be a convenient cop out for the BIB to escape social criticism.
Click to expand...

Yes, confirmed he was a long-term addict.

CNN has said it deeply regrets any distress caused by its report on the nursery killings in north-east Thailand, after its footage of the building’s blood-stained floor