Friends in CM have been posting all sorts of photos on FB, looks pretty bad.

PeteGill said:
Friends in CM have been posting all sorts of photos on FB, looks pretty bad.
Click to expand...

Close to 2011 levels which was a couple of weeks after I moved there. Down where KR lives we were isolated but in reach of some of the big shopping centres

Moo Uaon said:
Close to 2011 levels which was a couple of weeks after I moved there. Down where KR lives we were isolated but in reach of some of the big shopping centres
Click to expand...

Hang Dong road re-designated a 'river' .... foot high sandbags line the kerb on Kad Farang side as water continues to pour down from the hills and out of khlongs.

The usual low areas of CBD, Changklan, Wat Ket, Nong Hoi and Saraphi are flooded and likely to worsen later today as more water enters the Ping from north where it's still raining. After such a wet rainy season, far wetter than 2011, there is no ground absorption ... it's all running off.

Our mooban is ok. We had worse flash flooding at beginning of the season. 2 days it ago a large khlong at the northern end overflowed and threatened a group of 5 townhouses* again, they'd sandbagged in preparation, but had no interior inundation. *Developer had not built the 1st floor level high enough above adjacent khlong high water level ... despite local advice!

Management have been pro-active in clearing all drains and khlongs so it would need most of CM to go under before we see anything like 2011 levels.

This is the weir at Pa Daet, built since 2011, and IMO responsible for exacerbating the flooding in cbd areas whilst limiting floods below, including our mooban.
You can see the sluice gates are wide open yet water levels are considerably higher on the city side ... my guess is by approx 500mm when this pic was taken. 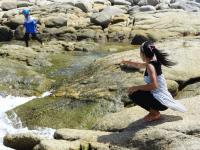 kaptainrob said:
I'll be in Bangkok next week and will likely need a boat ... 555
Click to expand...

Don't forget your wake board.
https://www.thaipbsworld.com/world-champion-given-suspended-jail-term-for-wakeboarding-on-road/
Can't find a link to the video.

kaptainrob said:
After such a wet rainy season, far wetter than 2011, there is no ground absorption ... it's all running off.
Click to expand...

What I recall of 2011 is waking at my new pad to 3 dry sunny days after overnight deluges had roughly half filled my lid-less plastic garage bin on all 3 occasions. I was in town for a month or so before that and it was fairly dry.
Everyone blamed the opening of the dam further upstream where the rain was far worse.

Moo Uaon said:
Everyone blamed the opening of the dam further upstream where the rain was far worse.
Click to expand...

3029 is flooded at Global House but navigable whilst the 121 interchange where it passes over the railway is submerged/impassable. Perhaps they'll moor some boats off the Iron bridge and have them run engines in reverse to help clear the flooding

Sun is out, 28c and 80% humidity though I believe the Ping is rising again.

Moo Uaon said:
Close to 2011 levels which was a couple of weeks after I moved there. Down where KR lives we were isolated but in reach of some of the big shopping centres
Click to expand...

I met up with Stew on my last night in CM in July at a nice establishment called Crusty's Bar and Grill. About half a kilometer from the Ping and on the same road as Bangkok Hospital but on the old city side of the river. A bit out of the way but great atmosphere and it was on my list of places to go back to on my next visit.
They have the following FB message up.
https://www.facebook.com/krustysbarandgrill?__cft__[0]=AZWegYo2sErD3ayMjYcm9bqv0Up5DlVdxI6L8oMr0Cot6org0XGOw1IpszND2VENlGvs6b8NseNOG9YWoR-7qT1pWLJrnSWflFRHHNIobRn5aEPdh-BfwzM_pfjlTj0H35E-lWByLq3uzQkaey55cf-FmMoNvJDwHlCPnsFZ6nPdxjKV9WWa8CcRO75Knai6NZs&__tn__=%3C%2CP-R
Krusty's Bar & Grill

We're sorry to inform you that Krusty's will be closed for the foreseeable future due to extreme flooding.
Have no idea when/if re-open.
Stay safe.

And I now believe the Mae Ngat dam is to release water this afternoon - extra volume to hit the city around dusk. They could have released water days ago but why not wait until it exacerbates an already bad situation ... absolutely no brains!

I was hoping to visit CM in 2 weeks time.
Do you think I should change my plans. I haven’t booked anything yet.

You normally pay extra for a hotel with a swim up bar so it might be expensive.

Rockitt you will be fine, and the girls will still be able to get to work.

Pack a pair of these just in case you need them to get to your fav LK road bar.

Seriously though I think you'll be fine.
I'd be more worried about BKK which is where all this water will be headed just like 2011.

Moo Uaon said:
I'd be more worried about BKK which is where all this water will be headed just like 2011.
Click to expand...

Yes, BKK is the worry!

This mornings Ping river levels are dropping, already half a metre below the peak and there remains approx 25cm of standing water in the lowest areas adjacent the river.

If there's no further rain in the north, the river should be below flood level by tomorrow and all flooded areas dry within a day or 2. Radar shows no rain activity.

Personally, I think cooler weather will arrive earlier this year and bring an welcome end to the rainy season.

Looks like NSW will cop another major flood and make CM's dampening look like a spilt cup of tea. Hopefully QLD is dry and warm by the time I arrive.

I'm thinking of being back in CM early November if the stars line up. May need to avoid any transfer in BKK would hate to get my shoes wet getting off the plane.

Thanks guys, I enjoyed the comments