It took me 15mins,if that to get from DMK airport to Sukhumvit Soi11
Sometimes I was the only car on the tollway
And Sukhumvit is DEAD!
I've never seen this as quiet before....hardly a soul walking down lower Suk
Click to expand...

Maybe they've all migrated to the popular Songkran areas?

just after songkran it is the same in CM...deserted and really easy to get around.

thais are on the move,holidaying and visiting family.

Not only that but the people down there are actually polite... unless you step in front of them in the water they are fishing. 5555

I have too many great memories while just bumming around New Zealand in a rental car in search of fishing waters. The people were all generous and reminded me of the prairie farmers in Canada. If you took the time to listen to there stories you were treated like a member of the family. 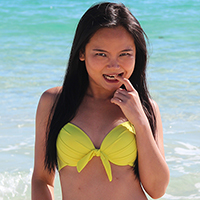 More people die on the road in Thailand in one day... than die in NZ in a whole year....
Click to expand...

Its both ... in some things its well advanced ... roll out of technology is often faster, in fact often NZ is used as a testing ground for certain software upgrades or even tech products, its small so if there is issues you are do damage on a small scale ... when i first arrived in Aus ATM machines for example were a mile behind NZ ... geographically its so much easier to roll out these types of technology ...

^ and ~80% were m/c accidents. Local reports and photos on CM108 tell a sad story of blood and brains spread across many CM roads.

My outrageous guess of 573 is out the window then.
I

That's okay, the local monk sprinkled some holy water on them and said they were good to go because now they are "protected".

Local mentality is bad enough, but when you add a party atmosphere and some booze it is a recipe for disaster. I don't think "smart" phones have helped much either. The phone epidemic is cause for a huge increase in traffic accidents in North America, and that is even with laws against cel phone use while driving. Cel phone users are worse than drunks. A few weeks ago I saw a young woman who would have been killed by a big truck had the lady's dog on the leash not stopped her. I was on my motorbike and watching it almost happen. The gal was so focused on her phone that she was about to step in front of the truck who was moving too fast to stop. The lady's dog stopped as the woman was stepping into traffic. Only the leash saved her when she suddenly looked up to see the truck. It was a very near miss.

Taken from an Economist article 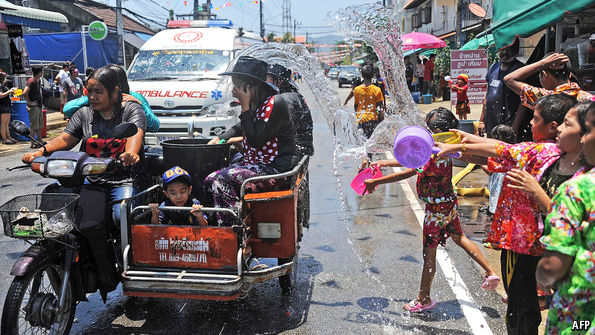 More grisly scenes are likely this weekend, when 22m Thais travel back to their workplaces after celebrating Songkran, the Thai new year. Road accidents always spike during the &#8220;seven days of death&#8221; that encompass the festival. A similar surge accompanies revelries at the turn of the calendar year.

Among countries for which the World Health Organisation (WHO) measures road safety, Thailand is less lethal per head of population only than Libya, whose drivers have to contend, among other things, with rocket-propelled grenades.

Each year more than 24,000 people are killed on Thai roads, a mortality rate well above other South-East Asian countries, even much poorer ones with lousier roads.

Thai roads are busy, testament both to the country&#8217;s relative wealth and its limited public transport. They are also packed with vulnerable motorbikes and scooters, which are involved in nearly three-quarters of fatalities. Only half of their riders wear an obligatory helmet, and even fewer of the passengers riding pillion.

Meanwhile, superstitious Thais have taken to placing small zebra figurines at the sites of accidents. The animals are said to ward off the unhappy ghosts of crash victims, lest they cause more pile-ups.

None of MsH's immediate family have traveled 'home' this Songkran
Her mother has instead gone to Bangkok for a month, staying with each of the two daughters and one son and their families there. Practical, safer, easier than them packing up and traveling with kids.

Tha Mai is very subdued for Songkran, some kids with water guns firing from their bicycles, very low key, just doesn't seem to be a big deal locally, and just the one day.

All of my wife's family leaving directly after the party tomorrow at about 4-5pm.....I think it will be absolutely jammed at that time going back to BKK from Hua Hin but they have to be back at work Monday

MarcTwoSix;281553 said:
All of my wife's family leaving directly after the party tomorrow at about 4-5pm.....I think it will be absolutely jammed at that time going back to BKK from Hua Hin but they have to be back at work Monday
Click to expand...

That would be about the worst time to depart, and full of alcohol? Or are you driving them Paul. Hopefully not all travelling in back of a pick-up.
Z

As suggested above - take the coast road.
Longer but probably much quicker tomorrow.

kaptainrob;281559 said:
That would be about the worst time to depart, and full of alcohol? Or are you driving them Paul. Hopefully not all travelling in back of a pick-up.
Click to expand...

From all the youtube videos I've seen, NOTHING a Russian driver does would surprise me. I'll bet the unfortunate Thai rider on the scooter was NOT wearing a helmet when the accident occurred.

I drove home from HH center last night about 12am
And the roads by where we are staying are so dark
I just clung to the shoulder on my side....
You never know if the oncoming car could be drunk or confused
You must log in or register to reply here.
Share:
Facebook Twitter Reddit Pinterest Tumblr WhatsApp Email Link
Menu
Log in
Register
Top